If you don’t subscribe to the dead-tree edition of The New York Times, you may have missed our full-page ad today asking readers, “Shouldn’t the ‘Humane Society’ do better?” Considering that less than half of one-percent of money spent by the Humane Society of the United States (HSUS) in 2008 went to hands-on pet shelters, lots of people think there’s room for improvement. If you didn’t get the ad, here’s a copy to view: 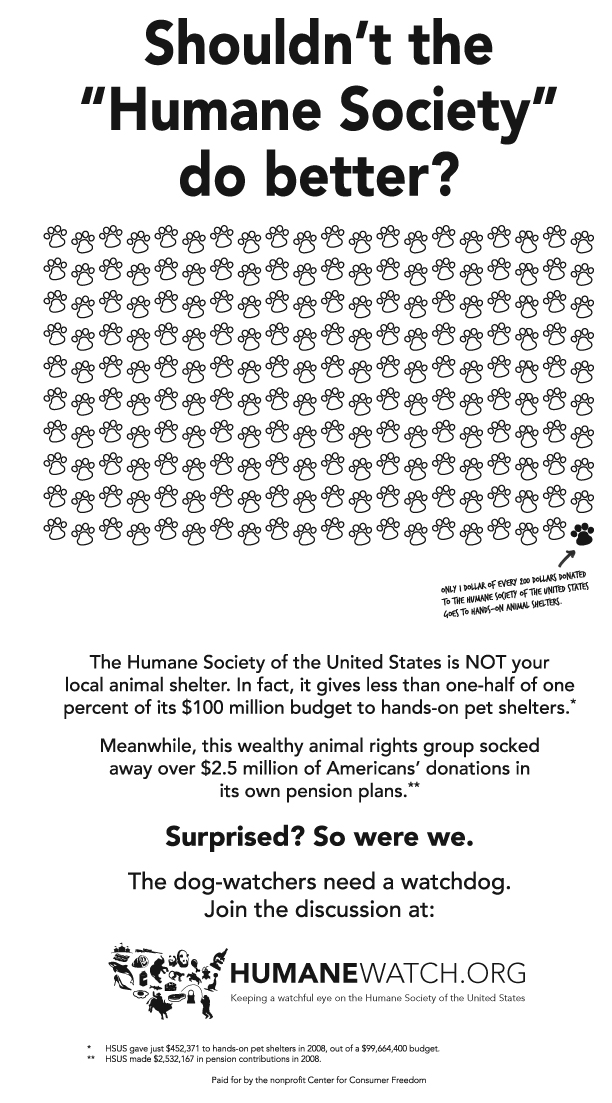 It appears we’ve hit close to home at HSUS headquarters. CEO Wayne Pacelle has dialed up his usual issue-dodging response and attacked us for supposedly having a profit motive in airing his dirty laundry. The irony is that Pacelle (as usual) closes his tirade on supposed “money-grubbers” with another appeal for donations. How telling. (Here’s a hint, Wayne: Your own bank account has $162 million in it. Why don’t you look there for loose change?)
Who has more to lose with a little scrutiny? Our boutique nonprofit whose entire budget is less than what HSUS sticks into its executive pensions, or an animal rights group closely guarding its image and raking in $100 million a year in gifts from unsuspecting Americans?
We want everyone to “follow the money.” We have, and here’s what we found: Loads and loads of it goes to HSUS lawyers, HSUS campaigns, HSUS lobbying, and HSUS pensions. Very little winds up aiding America’s underfunded hands-on pet shelters. It’s a fact that Wayne doesn’t deny in his response. And more Americans became aware of that fact today.
Our HumaneWatch project is just getting started. What you’ve seen so far is just the first trickle out of a very, very backed-up faucet. So perhaps we can count on Whiny Wayne having tantrum after tantrum this year. Fine with us. We’ll just keep speaking up for the shelter animals.