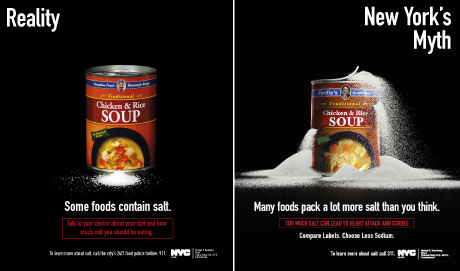 When we last checked in with New York City Health Commissioner Dr. Thomas Farley, he was conspiring to cover up the truth about the nutritional content of soda in order to shamelessly scaremonger about sugary drinks. (Because that's what good doctors do, right?) Now Farley has announced his next target: the dreaded ingredient called salt. But color us surprised: Farley's approach is more reasonable this time around:

The campaign uses advertisements with images of commonly bought foods – a can of soup and a frozen dinner – with salt bursting from their containers. The images serve as stark reminders that although food may not taste salty, “Many foods pack a lot more salt than you think.” Most people should eat no more than 1,500 mg of sodium per day. Some foods pack that much sodium in one serving alone and salt levels can vary dramatically among popular products in the same food category, such as salad dressing or canned vegetables. The new ads encourage consumers to compare labels and opt for foods with less sodium.

Of course, no can of soup contains the amount of salt portrayed in Farley's ads. In fact, as you can see, the 1,300 milligrams of salt in a can of chicken and rice soup is actually less than a teaspoon. (Everyone who remembers the soda debacle knows Farley isn't on particularly good terms with the truth.) But given Farley's shrieking over soda by depicting it as liquid fat, we were half-expecting a PSA in which a man grabs his chest and keels over after eating a spoonful of soup.

But if New York City's approach to trans fats is any indication, this could get a lot worse. The CDC recently awarded NYC a $412,000 grant to "help reduce sodium intake in the population for a three-year funding period." New York City is also spearheading the National Salt Reduction Initiative (NSRI), a partnership with state health authorities and other national and local health organizations. The group's goal is "a voluntary reduction of sodium levels with the objective of reducing the amount of salt in packaged and restaurant foods by 25 percent over five years."

There's just one problem: Very few food companies have signed on with the NSRI. So how can the reduction stay voluntary? (Hint: It won’t.)

Then there's the FDA which announced earlier this year that they intended to reduce Americans' salt intake — without providing any specific details at the time. Notorious food nags at the Center for Science in the Public Interest have been petitioning the FDA for years to revoke salt's "generally recognized as safe" (GRAS) status. This would require the FDA to approve the (much lower) salt content of every food in the nation.