The nonprofit Center for Consumer Freedom placed full-page ads in The Wall Street Journal, The Los Angeles Times, and The New York Times revealing a hidden substance lurking in some fake meat products. Several tests administered by an independent lab revealed the presence of the carcinogen acrylamide. The acrylamide levels found are high enough to require Prop 65 warnings under California law.

In 1986, Californians passed a ballot measure called Proposition 65, which requires a warning when a company exposes people to chemicals known to the state of California to cause cancer or reproductive harm. California considers acrylamide a carcinogen and reproductive toxicant.

The discovery of acrylamide in cooked plant-based meat adds another blemish to the perceived health halo around these products. Despite what the public may believe, synthetic meats are ultra-processed and not healthier than real meat, according to nutritionists. Some fake meats contain ingredients such as propylene glycol and titanium dioxide to help them mimic real meat.

Today’s ad is the latest in a series of print and video ads with the goal of educating the public on the contents of fake meat. Previously, CCF ran a commercial during the Super Bowl in the Washington, D.C. area. CCF has also had opinion pieces placed in The Wall Street Journal and USA Today. Learn more at www.CleanFoodFacts.com.

Full disclosure: We’ve been critical of Prop 65 in the past. But the law is the law, it’s still on the books in California, and we believe everyone should play by the same rules. 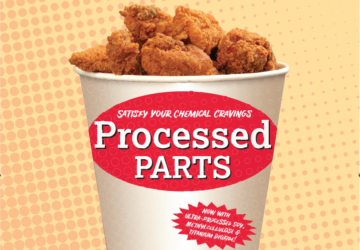 Ad: What Chemical Culprits Are Hiding in Your Fake Meat?