In what almost looked like a hostage video, Kim Kardashian filmed herself taking a real bite out of a fake Beyond Meat “burger” after critics questioned whether she had actually tasted the product.

Kardashian was appointed as Beyond Meat’s Chief Taste Consultant last week, but the video released in the announcement left many people questioning whether she had actually tried any of the imitation meat products.

The video featured Kardashian seemingly eating several Beyond Meat products, but watchful viewers noticed that none of the products actually had a bite missing. Kardashian’s fake chewing blew up on social media.

“She didn’t even take a bite of the burger,” one wrote. “The hamburger wasn’t bitten,” another added.

Several others joined the pile-on.

“Fake eating… I see you,” “You didn’t even eat the food,” and “This is beyoooond meat, so good you don’t even have to eat it.”

Several days later, Kardashian uploaded a video to her Instagram story taking what appeared to be an actual bite out of the Beyond burger – minus the top bun to get “rid of some of the carbs.”

(For those wondering about the patties: The Beyond burger has 7 grams of carbohydrates while real beef has zero.)

Kardashian also ate a fake nugget on camera and addressed her critics, writing, “Come on guys.”

In her role as Chief Taste Consultant, the company stated that Kardashian would be “sharing her favorite Beyond Meat products through Beyond Meat’s newsletter that will include exclusive offers, recipes, content and more.”

The announcement prompted a slight jump in Beyond Meat’s dismal stock price, but those gains rapidly disappeared. Last month, Beyond meat issued a bleak earnings report showing that it had lost $100.5 million in Q1. 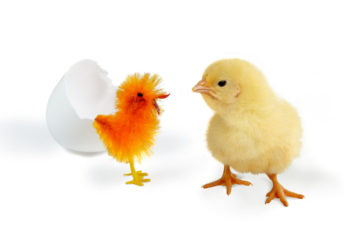 Beyond the Bird: Beyond Meat to debut Fake Chicken